Experience the early history
of USA
Come to PODC 2001

The Pilgrims (early English settlers) first landed at Cape Cod. American Revolution of independence from Britain started in Boston. These exciting places are next to Newport the conference site. At the very site you can see the oldest Jewish synagogue in North America (est 1763, Newport) and the oldest operating tavern in the United States (est 1673, Newport). The charming municipality of Newport offers numerous other tourist attractions related to the initial history of USA. There is even more in the vicinity. See the oldest schoolhouse in the United States (est 1716, Portsmouth), Museum of the American Indian (New York City) and the Freedom Trial including major sites of the American Revolution (Boston). The remaining part of this document describes some of the many tourist attractions in the area of Newport. Enjoy your stay at PODC 2001 and experience the early history of USA. [*]

Rhode Island is a state of firsts. The state lead the way toward revolution, and on May 4, 1776, the state was the first to proclaim independence from Great Britain. In 1790, Samuel Slater's mill in Pawtucket became America's first successful water-powered cotton mill, and in 1876 polo was played for the first time in the US, in Newport.

Newport is a resort city famous for its opulent mansions. It was home to the America's Cup Regatta for more than half a century and has hosted the acclaimed Newport Jazz Festival since 1954.

White Horse Tavern. Built in 1673, this is the oldest operating tavern in the United States open for lunch and dinner daily. (Marlborough and Farewell Streets, Newport, RI. Phone: 401-849-3600.)

Touro Synagogue. Built in 1763, Touro Synagogue is the oldest Jewish synagogue in North America. It was built by Sephardic Jews, descendants of Jews who fled Spain and Portugal to escape the Inquisition. Designed by a Georgian, Peter Harrison, country's first architect. It was designated a National Historic Site in 1946 and is considered one of the finest examples of 18th-century colonial architecture in the United States. The synagogue still houses an active congregation. (85 Touro Street, Newport, RI. Phone: 401-847-4794.) 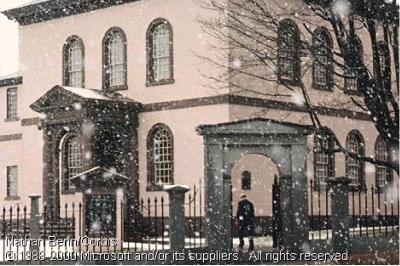 Redwood Library and Athenaeum. Portraits done in the 18th and 19th centuries can be found in the US oldest library building.(50 Belleville Avenue, Newport, RI. Phone: 401-847-0292)

Wanton-Lyman-Hazard House. The oldest restored home in Newport, built in 1675. Features a tour which gives the view of colonial and revolutionary war America through the eyes of individual Newport residents. (17 Broadway, Newport, RI. Phone: 401-846-0813.)

Friends Meeting House. Built in 1699, the meeting house is the oldest religious building in Newport. Features the history of the Quakers, once the dominant religion in Newport colony. (Farewell Street and Marlborough Street, Newport, RI. Phone: 401-846-0813.)

Newport mansions. The Breakers mansion is the largest mansion in Newport. In 1895 Cornelius Vanderbilt commissioned American architect Richard Morris Hunt to build his 70-room mansion overlooking Rhode Island Sound in Newport. The mansion incorporates many of the elements of the Beaux Arts tradition, including symmetry and dignity. Other mansions: Château-sur-Mer (1852), The Elms (1901), Marble House (1892), and Rosecliff (1902). 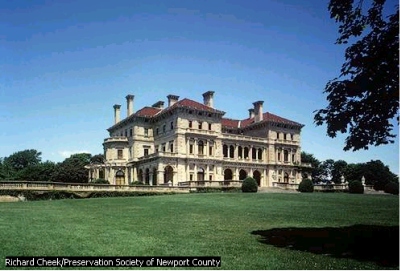 Hammersmith Farm. The unofficial summer White House during Kennedy Administration. The farm dates back to 1640.

Gray's Store. Gray's was built in 1788, and is one of the oldest continuously operating stores in the United States. Numerous antiques are on display, and the store has cheddar cheese, penny candy and collectibles for sale. (4 Main Street, Adamsville, RI. Phone: 401-635-4566.)

Sydney L. Wright Museum. This museum features both Native and Colonial artifact collections from both the pre-historic and settlement periods. Most of these were found at local sites. (26 North Road, Jamestown, RI. Phone: 401-423-7280.)

The towers. This Romanesque entrance arch flanked by rounded towers is a grandiose and sad reminder of a 19th-century casino, destroyed by fire in 1900, and Narragansett's own past as summer mecca for the rich and fashionable.

Founder's Brook. The first Rhode Island settlers from Boston landed here in 1638, led by Anne Hutchinson. She was the first woman in the U.S. to found a town. (Boyd's Lane, Portsmouth, RI.)

Brown University is the seventh-oldest college in the US.

Historic architecture is found throughout the city of Providence. Benefit Street, known as Providence, Rhode Island's Mile of History, runs near Brown University and Rhode Island School of Design. It was created in the 1750s, when Towne Street (today North and South Main streets) became too congested. Its 18th- and 19th-century architecture have made it Providence's best-known residential street. 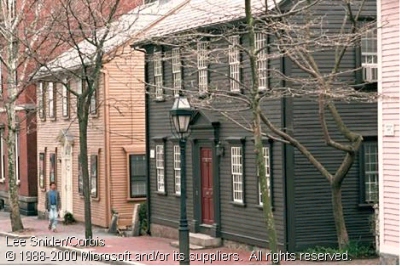 The Museum of Art is one of the country's finest teaching museums. It is maintained by Rhode Island School of Design - one of the country's leading art and design schools. It houses 100,000 works of art in its permanent collection, including works by Claude Monet, Auguste Rodin, and John Singer Sargent.

The southeastern part of the state Massachusetts forms a peninsula called Cape Cod. The Pilgrims, the early English settlers, first set foot on American soil in Provincetown, town in eastern Massachusetts, at the northern end of Cape Cod, in 1620. A community developed on the site about 1700 and Provincetown was incorporated in 1727. Now Cape Cod is an especially popular tourist location due to its sandy beaches and cozy towns. 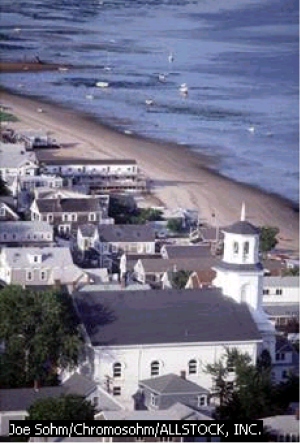 Massachusetts Institute of Technology. One of the greatest science and engineering schools in the world.

Museum at the John Fitzgerald Kennedy Library. Designed by I.M. Pei, the library is considered one of the most beautiful contemporary works of architecture in the country. The library tower houses a collection of document from Kennedy administration as well as audiovisual programs designed to recreate the era. (5 miles SE on I-93, off exit 15, at University of Massachusetts Columbia Point campus. Phone 617-929-4523.)

The Freedom Trial. Boston offers several walking tours of historical locations. The Freedom Trail connects 16 locations that make up Boston National Historical Park, including major sites of the American Revolution. One example is the site of the Boston Massacre in front of the Old State House, where British troops opened fire on a mob of citizens in 1770.

Black Heritage Trial. The trail traces the history of African Americans in Boston. It includes major sites such as the Abiel Smith School, the first public school for black children. 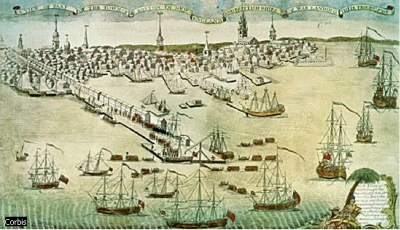 Figure 5: This engraving by American patriot Paul Revere shows British troops landing in Boston just before the outbreak of the American Revolution (1775-1783). Revolutionary forces drove British troops from the city by placing artillery on high ground overlooking the harbor in March 1776. (Corbis.)

Main Street. Paved with cobblestones. Lined with elegant houses build be whaling merchants and shaded by great elms, this is one of the New England's most beautiful streets. (Phone 508-228-1894.)

House of Seven Gables. Said to be the setting for Nathaniel Hawthorne's classic novel.

New York is the most popular city in the United States, the capital of finance, business, communications, and theatre. New York saw the inception and growth of USA. On the balcony of Federal Hall at Wall Street, April 30, 1789, George Washington was inaugurated as first president of the United States. The growth of the city was catalyzed by newcomers. Seven million immigrants entered the United States here with the supply of labor needed for its growth into a major metropolis. Each wave of immigrants has brought its customs, culture and life, which makes New York City the varied metropolis it is today.

Ellis Island Immigration Museum. The most famous port of immigration in the country. Millions of immigrants began their American dream here between 1892 and 1954.

The George Gustav Heye Center of the National Museum of the American Indian. World's largest collection of materials of the native peoples of the North, Central and South America. (One Bowling Green St. Phone 212-514-3700.)

Central Park. The first formally planned park in the country.

Rockefeller Center. The largest privately owned business and entertainment center in the world is made up of 19 buildings on 22 acres. (Fifth Ave to Avenue of the Americas and beyond, 47th to 51st Streets with some buildings stretching to 52nd Street.)

Hartford, Windsor and Wethersfield created a practical constitution called the Fundamental Orders, by which the powerful "General Court" exercised both judicial and legislative duties. The orders are sometimes regarded as the first written constitution.

Roseland Cottage. One of the most important surviving examples of a Gothic-revival "cottage," complete with period furnishing. Summer house, build in 1846, of an influential abolitionist Henry C. Bowen. (7 miles NW cia CT 171 and 169 in Woodstock. Phone 860-928-4074.)

Dinosaur State Park. More than 2,000 prints were unearthed at this site. Visitors are able to examine the crisscrossing tracks and view a skeletal cast and life-size models that lived here in prehistoric times. (3 miles S via I-91 exit 23, off West St in Rocky Hill. Phone 860-529-8423.)

[*] This work may contain excerpts from sources listed in the reference section of the document. Every effort have been made that information stated here is correct at the time of publishing. However, as things may change, no responsibility is accepted in the event that any information given is inaccurate.