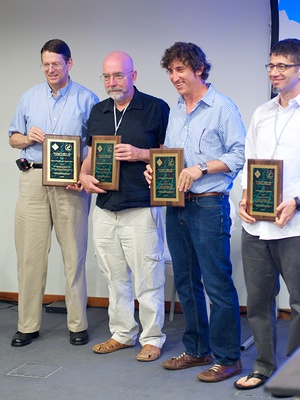 to receive the 2012 Edsger W. Dijkstra Prize in Distributed Computing for the following two outstanding papers:

These papers established the abstraction of Transactional Memory, which has fundamentally changed parallel computing both in its theoretical foundations and in its practice.As with many influential papers, the work by Herlihy and Moss presents a beguilingly simple idea: extend load-linked and store-conditional to allow a processor to update a collection of locations atomically. This idea arose from deep insights:

This last insight notwithstanding, Herlihy and Moss’s proposal proved too ambitious for the hardware of the day, and their work was largely ignored within the architecture community for most of the following decade. Within the theory community, however, it inspired multiple explorations of the limits of software emulation, most notably the Software Transactional Memory work of Shavit and Touitou.

Building on earlier universal non-blocking constructions, Shavit and Touitou showed how to achieve lock freedom without the need for costly recursive helping, and thus provide effective non-blocking multi-word operations purely in software. It was the first work to demonstrate that software transactions could, under the right circumstances, outperform conservative locking.

In terms of fostering research, transactional memory has become a truly transformative idea. For example, two years ago, the second edition of the monograph by Harris, Larus, and Rajwar on Transactional Memory listed over 350 papers in the field. Google Scholar reports almost 1400 citations to Herlihy and Moss, and almost 1000 to Shavit and Touitou. The annual TRANSACT workshop, sponsored by ACM SIGPLAN, is now planning its eighth incarnation. In terms of practice, software architects have developed dozens of runtime implementations, both blocking and non-blocking, of dazzling algorithmic variety. At least four major compilers, including gcc, now support transactional memory in C++. Hardware implementations have been developed by Azul, Sun (Oracle), AMD (on paper), IBM, and Intel. The IBM and Intel implementations, in particular, ensure that hardware support is here to stay.

These two papers started the distributed computing research community along the path towards the design of general multi-word transactions; ones that in the future will most likely be based on a combination of hardware, software, and language techniques. Transactional memory serves as an outstanding example of how the distributed computing community has influenced the world.