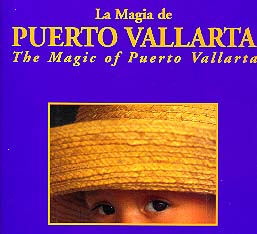 Puerto Vallarta is much more than a resort town. These images and texts are taken from a book (editorial Mardeki, 1995), which presents the essence of Vallarta's spirit, combining the accounts of her past, her present and her future with images full of feelings, colors, perfumes, sounds and flavors that uncover the character and soul of Vallarta. 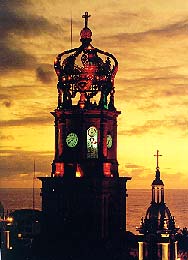 Vallarta, a symbol of legendary beauty, grand sunsets, friendly people, is an enchanted paradise that fascinates all. It has its own special magic that transcends its fame as a tourist center discovered by Elizabeth Taylor and Richard Burton. 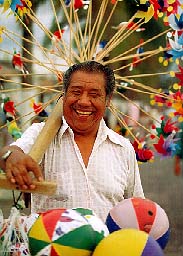 Some believe Vallarta's magic arises from the marriage of the mountains with the Pacific waters. Others tell of being captivated by the town with its cobblestone streets and sinuous mountains. But for many, the magic of Vallarta is the Vallartenses - free, proud, simple, noble, friendly, kind, and never in a hurry.

Vallarta is within Banderas Bay, the largest of Mexico's natural bays, the second largest bay in North America, and one of the deepest bays in the world. Viewed from the sky, the huge bay looks like a horseshoe. Cabo Corrientes is at the bay's southwestern tip and the northern point is Punta Mita. The distance straight across the bay from Cabo Corrientes to Punta Mita is 32 kilometers. 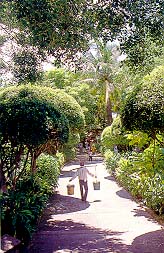 The island of Cuale is hidden from view amongst the bridges along Cuale river. This secluded setting provides an escape from the disturbing noises of the vehicles and the agitation of the people. One only has to walk down the steps from one of the bridges to enter another world removed from the hustle and bustle. 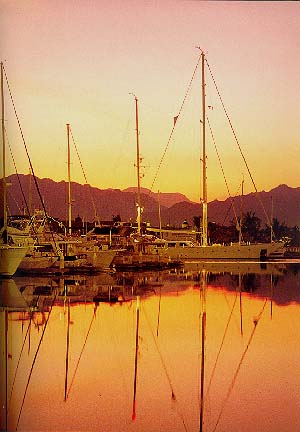 Marina Vallarta is a window to a modern Puerto Vallarta, a marine paradise for boaters, a home for new families and American retirees. Seven years after its creation, Marina Vallarta has become one of the most complete international marinas in Mexico. Some of the major hotel chains are here, as well as a championship landscaped golf course. The marina boardwalk has shops, fine restaurants, and cafes. 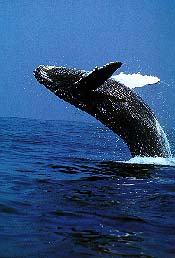 The earth descends from the jungle to become sand; the turbulent waves of the Pacific caress the tame beaches; the sun's radiant beams appear as luminous stars on the sea; the cloudless sky reflects its brilliant light. Suddenly, the sea opens, a giant whale appears to take a breath of air, then submerges, and then the calm returns.

The beaches on the north side are unique because the sand is the whitest in the bay, the beaches are the widest, and the vistas are most impressive. On this side of the bay powerful sea waves pound the shores, and the flat and arid lands shine under the tropical sun. 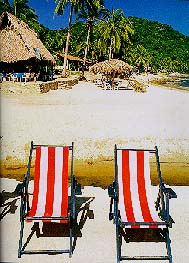 Yelapa, Las Animas, and Quimixto are simple and uncrowded beaches. To many, the problem with these beaches is that they are unreachable by road - in reality, this may be their blessing. You can experience some of Mexico's culture, past lifestyle, and folklore. Some say Las Animas (The Souls) is named after a pirate who hid a treasure here and was killed while returning to his ship. The treasure was never found and legend holds that the ghost of the pirate is still here, protecting his horde.

During the sixteenth century, Vallarta was, if it can be said, a tourist destination for the Spaniards and pirates. Famous buccaneers stayed here while en route from Manila to Acapulco. The special beauty of the bay also attracted conqueror Francisco Cortés de San Buenaventura, the discoverer of Puerto Vallarta. Almost 500 years have passed and Puerto Vallarta continues being a fable- the sunsets are spectacular, the beaches are beautiful, the mountains are imposing, the homes nestled in the hills resemble a Christmas nativity scene.